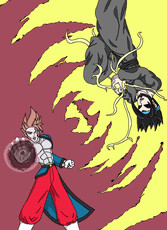 
In the Omin Mesa Saga by James the main characters are Golu and Jake G. Lumin. Most call Jake by his last name, Lumin. He is part of a race called Tatayans. They don't eat sleep or breath air. Some say they are Perfect. Lumin has the ability to have anything he wishes for come true once a day, or every 34 hours. He and Alex Ko Son, the Fire Queen, are bound to each other by love. The story starts when Lumin comes back to life by taking the body of his original father's new son, Jake. Golu and Lumin fight evil Mashens, a man named Belthasar, Sir Clayton and his Androids, Alex's father Shang Son, Macoyhay and his corruption, a group of Daynalives, the recreation of a terrifying Starshifter, and the largest evil force know, South Alfred. When Lumin kills The Starshifter, he starts a chain reaction that destroys the universe. He and a few others live inside of the Tatayan shield. Then all new evil comes about. The Dark Lord Ra Mefesto, his brother Griendal, and the King and Queen of Trick and Shadow. By the time Lumin gets back into the time chamber to rest he is dragged back out, after the next big bang and the creation of another universe. Tayton, Lumin's son Dantie, and Lumin's Evil side Masque become the new threat. Then Many years later when all goes calm, South Alfred is reawaken.


In the Gates of the Cenplex Saga Kurt Dynae is greeted by an unusual character, Prophet Augusta. She leads him from universe to universe looking for a Belthan named Belthanka. On the way, he meets a low life named Recoil, who joins them. They liberate many of the Belthan strong-holds in the Cenplex over the year of their travel. They even find Lumin and help him with a mad man. Kurt discovers how powerful he really is and that some of the Belthans that he has been killing are not evil or even doing anything bad. He encounters a strong government officer named Titus, who slows him down. After learning to control himself they continue their search for the ones that have corrupted the universes they travel to. On the day of one year passing Kurt, Augusta, and Recoil find Belthanka. After Belthanka's death Kurt leads Recoil home and finds a statue of himself. He learns that although people all over the Cenplex love him some hate him. One was a girl named Megan who he learns is his half sister.

i think I'm forgetting one or two 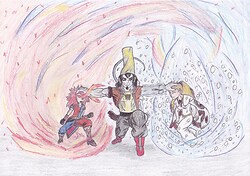