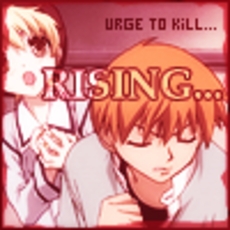 Hey everyone. I decided to erase all this CRAP i had and start over. I like alot of things, mainly anime ... if you hate anime leave right now, and if you don't like any anime/manga i am going to list below then you can leave also


I Like:
Full Metal Alchemist, D.N.Angel, Furuba (fans should know what that is), Chrono Crusade (that IS how you spell it is not spelled Chrno, that is the way gay retards spell it because then it would sound gay), Pita-Ten, Absolute Boyfriend, Wolf's Rain, Invader Zim (that's not REAL anime but whatever), and Azumanga Daioh.

Shout Out to: Goahsiu! My bestest friend EVER!

Thank you for the comment i'm glad you liked it. ^-^

omg i love your icon!

If that doesn't work, just go to Randomluck.Deviantart.com

Hey Dani, just checkin' in on my old account. I really would like it if you checked out my new stuff though. I have improved alotta.

Yeah I know.Or maybe he might be so shocked he'll shoot himself

I agree!!!WJAT NICK DID WAS WRONG!!!!Jhonen is going to shoot himself when he finds out about this.
Go to page: