Member Info
Well. Umm...hi. I am 11-13(you decide; I'm open) and when I turn older than that, I shall change this.
I LUV GIR!!!
Now that's out of my system, I just have to say that eventually, when I get ahold of a scanner and don't have to use my sisters, I shall post my doujinshi on this website. (hah. got a scanner a billion years ago but still haven't put any comic up! w00t!) Maybe. Probably not. I have a website and have never gotten around to doing it on there. Oh well. I WILL PUT PICTURES ON HERE! I PROMISE!!!
So...............I once made 100 pages of LA LA LA LA LA LA LA LA LA. I types that over and over again because I was bored, and it grew to 100 pages. That was the highlight of last year.

I like My Chemical Romance. Favorite band ever. And System of a Down. And Black Eyed Peas. And Nirvana. And Alice Cooper. And Led Zepplin. And Metallica. And The Gorillaz. And Green Day. And Panic! At the Disco. And Lady Sovereign and Gnarles Barkly. And Tigarah. And Wolfmother. And Marilyn Manson. And other people I can't think of. *shifty eyes*

One piece of advice for anybody who tries to steal my computer and internet connection. Don't even TRY(!) to watch the Helena music video on it. It sucks. It stops, goes, stops again, loses track of where it is, and other crap like that. I can watch the Hypnotize music video, NO PROBLEM!!! But the Helena vid, no. Never.

Anyhoo, I'll now start to describe my new comic. I actually might finish it. Then, I might send it in somewhere. Like, SLG, maybe. But probably not.

Note: So I sent in my comic sometime in October/November to Slave Labor Graphics. And...well...I got a letter back a few days ago (like...early January 2007) saying noooo...oh well, I'll try again later...

Another note: I broke another finger!! On January 19th, 2007, I broke my thrid finger, my left ring finger. This means that both ring fingers are broken.

Anyone else excited about the new FF movie?
22337

your speach is not too blatant. i was just agreeing with you.

yes i did make them there. i agree with the whole small takl thing, id rather have a long intillectual conversation in which i laugh at the end if the other person whom i am communicating with does not comprehend the words i speak.

happy monday to you too

oh hello gina. my names misty, as stated on my profile. yes i do have lots of stuff on it lol nice 2 meet u 2 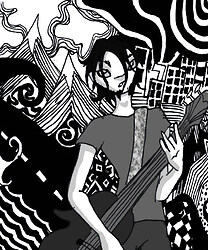 Daron with a Druggy-High Background