I don't know what to put about my self really, I've never been good at these sorts of things.-_-' So I guess I'll just put what I like and do.


Everyday when I come home I go on the computer and sit there for many, many...many hours. When my Mom tells me to get off the computer, I draw. I draw and I draw and I draw. Or sometimes I don't even go on the computer I draw. but most of the time...I'm on the computer.^_^ I have a great liking for Yaoi and Shonen-ai. I think it's nice to see two boys together, I know there's many of you out there that do to, don't say you don't! Also, for some reason, I like freakishly light blue eyes. I don't feel like writing long sentences anymore so I'm going to put everything in point form now.

that sounds cool! Hope you get it soon!

Cool. I like the name Walker lol. That's cool congrats! Maybe I should get an account on deviant art. A lot of people have been saying that they are more active there. Hmm...I don't know. If I do then I'll check out your artwork! Cool what does the shirt look like? I love looking at Japanese Products on the internet! It's so much fun! lol. A while ago I went to the Flea Market and bought a Japanese umbrella for only 3 dollars! It's pink and white and has cherry blossoms painted on it. Yep...Well cya later!

Hey watsup? I havn't commented u in a while! How are you? My aunt had a baby a few days ago. It's a girl. Yep. Anything exciting happen 2 u lately?

It is really funny and it works!!
You have to try it!!
Go to page: 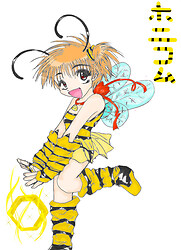