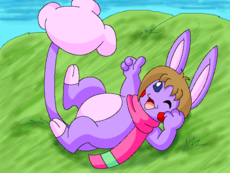 Family: I'm married and I have a son whom is 3 years old.

I love to draw and I love to try to make friends but its really hard to do that..

I will do art request some times, but You have to ask I'll always do Art Trades though.. but if you request something I might and might not do it, it depends on how I'm feeling.

my main pokemon OC character is my half Pikachu Half Aipom character named Sarahpom which I call a Pikapom.. she some times wears a scarf and some times not, and some times arm bands and some times not, depending if I'm feeling up to drawing them or not. her hair style flows with mine, so if I grow it up or get it cut, the way my hair looks on me is how it will turn out on her. but everything else on her stays the same.

I have many other characters, I'll link to their pictures later..

Your Pokemon leaves me speechless........THERE SO CUTE!!!

Thank you very much, each time I'm trying to get better but in the end I just draw the way I want to.

WOW! Your Pokemon art is adorable! *favs you* XD KEEP IT UP!

Thank you very much 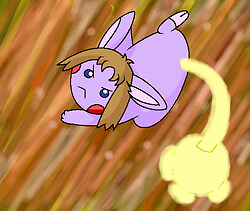