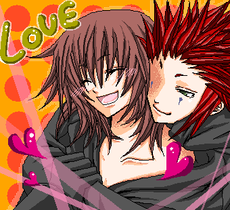 My name is Frankie. Wish it was Axel T-T

Quote: Got it memorized? *sniggers*

Fave Character Ever: Axel, the one and only Flurry of Dancing Flames! Then Marluxia, the Graceful Assassin.

98% of FAC hate Gays
if you're one of the 2% who think that the 98% of FAC should fracking die, put this on your profile

Take the Magic: The Gathering 'What Color Are You?' Quiz.

I love your avatar, and profile picture ^^

>XP You couldn't have it anywayz

XD My sister's birthday is on the other one, lol