(... I just noticed that all my friends are younger than me, and yet they're all still TALLER than me. Except, of course, for the non-human ones...)

Comics/Mangas/Webcomics: Yu-gi-oh!, FLCL, Eerie Queerie, JTHM, Fruits Basket Death, Save my Earth, I Feel Sick, , Nightmares, Serenity Rose, Girly (At go-girly.com... Trust me, it's hilarious!), RPG World (RPGworldcomic.com) , Sinfest (Too many sites have it. Just Google search it), Return to Sender (rts.lunistice.com), Lenore ("The cute little zombie girl who tackles life with a perverted innosence that makes you want to give her a big hug... and then step back very quickly while checking to make sure everything's still attatched"-Roman Dirge, creator), and Ray (which is actually done by another artist on Fanart Central).

TV and Comic characters:: Joey, Seto, Alaster, and Bakkun from Yu-gi-oh! (yes, that's what I call Yami Bakura now); Gaz and GIR from Invader ZIM; Little Slugger and Yoichi Tyra from Paranoia Agent; Haruko and Naota from FLCL; Lenore, Ragamuffin, and Pooty Applewater from Lenore; Sera from Serenity Rose; Nny and Squee from JTHM; Kyo from Fruits Basket; Ryan and Matt from Ray; Frank from Donnie Darko (yes, I KNOW it's a movie, but Frank's just so AWESOME!)

~~DISLIKES~~
People who like Tea/Anzu from Yu-gi-oh (friendshoot preacher...), my ex, people who try to be my friend when they KNOW I hate them, Bees and anything related to them (wasps, hornets, etc.), Brandon what's-his-name, CRAIG what's-his-name, spiders, most bugs, darkness (dark is okay, but I freak out in pitch-black darkness. Don't know why, either.), heights,

~~FINAL THOUGHTS (mini-bio-thingy)~~
Carrie: "Hi, there, morons! Nice ta' see ya! (said the nut job as she typed on the computer...) I'm the paranoid-schizophrenic, autistic, bipolar, obsessive-compulsive, antisocial, bloodthirsty, bisexual, manic-depressive, YAOI-lovin', mentally unstable, wrist-slitting aspie known as DEMONSPITE!"
Duski: "Ah-HEM!! Forgetting something, Carrie?... Or, perhaps, someONE!?!?"
Carrie: "Oh! that's right! This is my 'evil' alter ego, DUSKI!"
Duski: "Gee, thanks... And I AM evil..."
Carrie: "Suuure Dusk, you just keep telling yourself that... Anyways, I love drawing more than I love life, and nowadays I'm taking Yu-gi-oh! requests (YAOI welcome, obviously, but nothing R-rated, okay?), though it may take a while to finally load some-fracking-thing UP! Once I do, though, I promise you all, it'll be worth it!"
Duski: "Just remember: If you want a pic of you with someone else, Carrie has to know what you LOOK like. She can't see you through her computer screen."
Carrie: "Or CAN I?...."
Duski: *sigh* "No. You can't."
Carrie: "Thanks for disillusioning me."
Duski: "You're welcome." ^-^

Yay, thanks for answering my questions and stuffs. I like your new stuffs too, still my faves..

Good God, you're alive. lol. Glad to see you're still with us and sorry to hear about your scanner. If it makes any consolation, i don't have a scanner so I KIIIIINDA feel your pain. But I hope it works for you.

Hey, Demonspite. Don't mean to bother you but:
1. how's the picture coming along?
2. how's life?
3. OMG I love Gorillaz! Noodle rocks; Down With Murdoc, Up With 2-D

I got the first chapter of 'Dib The Mighty' up!

Its all good,Thanks for actually doing the request ^____^ it makes me very happy....keep doing that Voodoo! *dances around like a madwoman* EVIL SQURRIELS!!!!
Go to page: 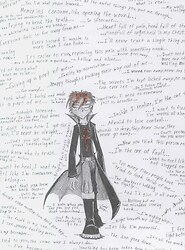 Worth a Thousand Words...