Awesome Vid, Check it out.
http://www.youtube.com/watch?v=0Xju6tWlt5A

You laugh at us because we're different. We laugh at you because your all the same." Put this in your profile if you think It's okay to be different.


some info on the crazy phycopathic freak me!!^^
name: Jesse

alternate ego: Chester (he can be realy annoying and he's a HUGE pervert)

hobbies: Watch anime, read manga, play videogames, draw, and spendtime on the net. (I don't have a life. *sobs*)

likes: video games, anime, manga, cartoons, t.v., making new friends, being able to act how I want when ever and where ever I want, all of my friends, SOUTH PARK, and of course CHEETOS!!!!^^

dislikes: people, places, and things that dislike me.><

My fav show is, if you can't tell by my profile, South Park

My fav Manga is Negima

My fav anime is Naruto

My fav comedy show besides South Park: Mind of Mencia

My fav show that isn't an anime, a cartoon, or comedy: CSI series

My fav new shows: The Daily Show with Jon Stewart and The Colbert Report

I don't have a favorite band

My fav video game is the legend Zelda series

I'm an anime freak so you do the math...but just in case your bad at math that means I like almost every anime.

Don't be afraid to ask me any question that comes to mind, I don't bite. I just throw stale cheetos at your head.^^

…because juries don't understand technical jargon, we're getting closer and closer to situations where lawyers are going to employ the Chewbacca Defense, as created for South Park. Already, Slashdot has suggested that SCO is using a Chewbacca Defense in their case. Basically, you just have a convincing lawyer make up a bunch of technical stuff, make connections that don't have anything to do with one another, point out that it does not make sense, and therefore, the case should get thrown out. The legal strategy of the twenty-first century: trojan horses and Chewbacca.

more info on me later^^

So I have no idea if you remember me, but we used to role play on here together. I'd actually completely forgotten about this site until the other day. I dunno if you plan on coming on here again, since it's been a really long time, but if you do, I'd love to hear back!

HEYYY text me sometime yo!

Hey sorry I haven't been on in a while. skool is killing me slowly :) 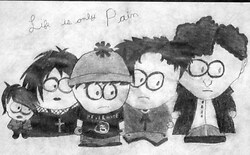