-About the /-Girl-/-
Name: Hiroshima Sake
Age: 14 (17 after timeskip)
Bloodtype: AB
Element: Thunder
Personality: Loyal and loud, she's a constant joker, though she doesn't look the part. When it comes to fighting, she puts her all into it, never giving and becoming quite persistent. She often teases Ino and Sakura, taking joy in toying with others.
History: She's a child of grace. Like her mother, she shares a blood contract with cats. She has been training on summoning. Nibi-chan, a black cat, the strongest of the cats for summoning is who she first summons on her third attempt. Of course, it's long before she can summon Nibi, only summoning a small kitten named Satu-kun, on her first and second tries.
Rank: Genin (Chuunin later in timeskip)
Village: Konohagakure
Teammates: Okinawa Taiko & Nagasaki Akane
Speciality: Though not one of taijutsu, she attempts to use it at times. She is better with ninjutsu and genjutsu. A few taijutsu techniques she can use with perfection, but anything too complex causes her to stumble and become clumsy.
Love Interests: Zetsu

The akatsuki kicks @$$, evil or not. And Zetsu-kun is awesome! So deal with it.

Here is your request xtachixhikarixtsux, hope you like it :D

Sure thing! :D I barely ever draw Zetsu, so I hope it looks okay!
Go to page: 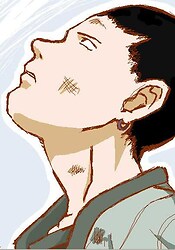