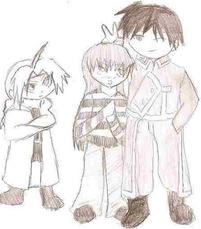 Eye color: blue-green (I've had people tell me both)

Hair color & length: Most of the time, it's brown with blond highlights in it, but sometimes it changes with seasons, it's odd. It's brown in the spring & fall, more blond than brown in the summer and dark, dark brown in the winter, and I've never even dyed my hair! My hair's long, about waist-length, and I HAVE bangs.

Fashion sense: I have none whatsoever! I luff old-looking shirts and stuff like that. I also luff to shop at Hot Topic, and if you caught me wearing makeup, you'd be a dead person.

Stuff I love to do: DRAW AND WRITE ABOUT ANIME, play video games (bow to the Queen of Kingdom Hearts!) play soccer and basketball, run cross country, bowl (even though I'm not that great, I've broken 100 about 4 times.), dance, and be random.

My writing style & favorites: I love being descriptive. I could write a couple pages about just a couple of actions and thoughts. I feel it really lets you know the character. I love to read random and hilarious fics, like the one Corn_the_OTHER_White_Meat wrote called Discern Your Actors on Fanfiction.net! It's hilarious!

Food:Anything and everything! Just call me Tyson (Beyblade)! If I had to pick one food though, it would be Ramen! I can't live without that stuff!I put mustard on it (actually I put it on everything)! I love any kind of pasta too!
Drink: Either Mt. Dew or any kind of tea (hot or cold, I don't care.) I also do like Black Cherry Vanilla Coke.

Anime: Beyblade, Kingdom Hearts (I and II) Fullmetal Alchemist, Candidate for Goddess (I haven't seen it in ages), Digimon, One Piece, .Hack Sign, Wolf's Rain, a couple others.

Fullmetal Alchemist:
Episode: Way too many of them
Ed: DON'T CALL ME SHORT/ WHO ARE YOU CALLIN SHRIMP?!?!?!

Regular Shows: Everybody Loves Raymond, Whose Line is it Anyway, and anything on the Food Channel.

Bands/ Music: Death Cab for Cutie, James Blunt, Yellowcard, Fall Out Boy, The Beatles, Matchbox 20, Clay Aiken (I know he's a little old news, but I like his music), The Click 5, Jason Mraz, The Killers, Anime/ Video Game Techno music, and The Eagles.
-------------------------------------------
My OCs:
Ayia: A girl from Russia, the main character in my story The Prince and the Blader. She was in BIOVOLT, but ran away shortly after an accident with Kai and his Black Dranzer. She used to have a relationship with Kai and Tala, but she was scarred when she ran away from the abbey, and forgot about her past loves, so she moved to Paris, and became a street urchin battling for money. She oddly started to remember her past in dreams, and remembering her life in fragments when she joins the Majestics and falls in love with Enrique. She learns through the World Championship that Tala has been drawn to the darkness in his heart and is possessed by the dark wolf Bitbeast Motoki, her old Bitbeast. Is that merely the reason for his odd behavior, or is it something more, and can she bring him back to normal by defeating the Bitbeast that still is a part of her? And can she face a past that haunts her, knowing that the more she finds out about her past, the shorter her future gets?

The Windwakers: They come in later in The Prince and the Blader. All their Bitbeasts are foxes, and they're a pretty tough team.They are made up of:

Alexis Romanov: A new character that will be in my new story, Bleeding Blade. He is a royal prince, and the last of the Romanov family of the Russian dynasty. He loves to blade with his Cloud Leopard Bitbeast, Wolkig. However, he has a terrible disease that makes every launch a chance between life and death--Alexis is a hemophiliac. That means that his blood cells are thin and if he gets a small cut while blading, he can bleed to death. Can he become a top notch blader, knowing that every battle could be his last?
------------------------------------------------
P.S: If you can't say something nice about a person, put it on a piece of paper and tape it to their back.

OH, AND MY PROFILE PIC WAS DRAWN FOR ME BY THE AWESOME DERUFIN, CHECK OUT HER GALLERY!!!!

wanna be in my contest?

Hi, I realy like your Ouka the Werewolf pic. ^-^

Oh, and Wolf's Rain, Roxas, and ramen are awesome!!!

Hi Orelin, how are you?

Thanks again for the comments, glad you're liking the new fic ^^

Thanks for the "Soleanna Chronicles" comment. I honestly wasn't sure how everyone would think of that, lol. Since most hated Elise...

Ah, school's usually hectic this time of year, no worries ^^ I'm going nuts with it to, probably why I'm not writing my best and drawing even worse, lol!

Hi Orelin, how are you doing?

Hey, Orelin. It's been a very long time since I've last heard from you. How are you doin'? Anything new?

Hey Orelin, thankyou for the comment on my pic ^_^ That pic was a result of pointless experimentation lol. It just kinda....happened O.o' I'm glad you liked it though!! It's good to hear from you again. How have you been? I hope you've been good!! Anyhow, thanks again! I'll see you later ok ^_^
Go to page: