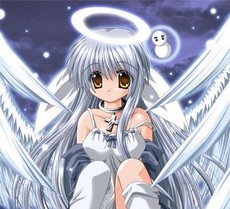 REQUESTS
I will draw Code Lyoko, Full Mettal Alchemist (Video game, Manga or Anime), Eureka seven (Manga or Anime), Anne Freaks, Aria, Pretear (Manga only), Danny Phantom or Futarama.
Any other shows, I can (but might not) draw, but I will need a refference picture.
I will also draw Original Characters.

I go by many names, but my real name is Jenny. I usaly go by Ella, Mika Ryoko or Mika Chan/ San online, though yah can call me any of those names.

My whole family thinks that Anime is strange, so yeah, I end up being the odd one out, but whatever.

more chaps up on we fight alone

That must have sucked… what happened to it
My OS went and crashed a few months back, lost everything. I had a fit
Oshnsoa Shnedashn Kiunepgli

It got a bad virus and I just barely saved it. I did not loose anything luckley. Thanks for your concern. Sorry about your computer.

I have added several new chapters to we fight alone.
Thanks for reading it
Oshnsoa Shnedashn Kiunepgli

Thanks for telling me, sorry i have not been on in a while, computer got busted.

and, how about Aelita in her super sweet new clothes :D

Ok, I will try to have them done soon.

Hey sorry I didn’t get my pic done, I’ll probably put it up anyway when its done (if ever)
On another note I add to more chapters to We Fight Alone
Oshnsoa Shnedashn Kiunepgli

Cool. I must go check them out.

Ok!!!! take your time!!! And i found some pics from web with Karasu:

Ok these are some reference pics just to let you know how it looks... You DON'T have to copy one of the pics or make him look exactly like the real one!!!!! I want to see your ORIGINAL version of him!!!!! And of Kurama.

Again you should not draw the identical version of the images!!! It's to hard for everyone to do that! I want to see your version of them! I recommend you to also watch eps 55 and 56 from Yu Yu Hakusho! on weekends when you have time!!! It's easier like that to understand the relationship between them!
And have no rush! I can wait til Christmas! even more!!!
Thank you again! And i hope i haven't bother you with this HUGE comment!!! BYE, BYE!

CRAP!!!! now I find out that the Kurama pics are forbidden!!! OUPS!!!! didn't know that before!!!
Hope this link works: http://i10.photobucket.com/albums/a117/wolfdemonessali/Bishies/Yu%20Yu%20Hakusho/kurama2.jpg
And this one too: [url]//http://www.animechains.com/boys/top50/kurama.jpg[/url]
And this one: http://www.fortunecity.com/rivendell/wizard/667/kurama3.jpg
If these doesn't work either just draw me Karasu...

>< like it wasn't enough  giving you a huge initial message!!!
Sorry for the big mistake!!!

Its ok, I hope tio have them done soon. So do yuou want of each of them separate and then of them like hanging out with each other or something like that?

Yeah, well I only have a few entrys and now a few friends at school want to enter, so this is the last extension.
Go to page: