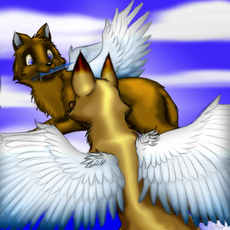 Travis and Siome, As a wolf and fox.

Name: Travis
Age: 16 (though I act 13 sometimes... nearly always xP)
Eyes: A cerulean blue (YES THEY ARE THAT COLOR!)
Hair: A chestnut brunette, straight or curly. (Depends if my sister straightens my hair while I am sleeping or not -_-)
Clothes: A t-shirt and shorts. :O
Body built: I am like scrawny with muscles.... it's pretty sad.

-Dislikes-
Yo mama xD
Squirrels
Pink
Losing
Coloring pictures that I draw
People who think they are all that
People who draw poorly, but other people like it, treating it like a god.
People :O

Welll... I like to draw on the computer.. and yes I do take requests. I am not a awesomely amazing drawing.. but that's because I don't have photoshop -_0 Rawr, I am working on chalk Teen Titans right now, and this is my first time to draw them so NO FLAMINGTHE TRAVIS! Starfire is up there It is done in chalk.. and FA won't put it on -sobs- I know it is dark -stupid camera- but I shall fix it soon!

Siome and Travis are my "everything"charries, They claim to be only "friends" but you know.. people lie ^^ I am writing about them now.. so It will hopefully come out soon.

Thanks for the good work and effort! And some good friendship xP ^^

READ MY STORY because I command you too! Many people think it is hilarous.. other... I don't know about others... oh well.. it is about Kingdom Hearts so ^^

ME! It amazes me how much I look like a redneck o_o

this is Travis except skinnier

Kingdom Hearts: Final Confrontation_Cunla's Journey
Hunchback of Notre Dame
Anything But That.
Songs that I love.
Buried Secrets and Unnoted Sins
5465147899465704651442242

dude youre sooooooo good!!!
i wish i knew how to draw so cool......*druwls*
ya have a special programe for that??

heya
remember me?
if ya do,how ya been?

Hey there :D
I don't know if you remember me or not... or even if you still use fanart
Heylorlass here
I'm looking around to see if any of my old friends still exist.
Would be nice to catch up again :)

Wolf what's up?
I haven't heard from you.
Padfoot isn't ever happy!
I Wish you good luck on that!
howl me back!