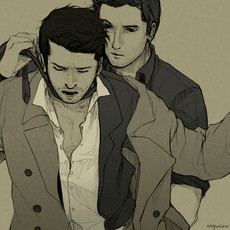 NOTICE:
I do not do requests unless you've looked at and commented on at least 3 of my drawings, or story chapters. Even then, I may not do the request. Don't take it personally, I just don't want to put time into something I'm not into.

Hey, good to hear from you! Hope all is well with you! Things are the same old, same old here pretty much. Naruto (just the manga at this point) has been inspiring me for Okuden, so I totally get that! Can't wait to see more of your work.

I'm glad you're still reading! Serving and Okuden are two of my favorites that I've written. My new Resident Evil fic is pushing that, though. I got bitten by the RE bug.

Right now I'm working on a Supernatural fic, and I've got several other ficlets in the works, but if the bf plays much more Ninja Storm I'm gonna have to start writing hardcore.

I'm in the process of getting caught up on Okuden, and I just finished turning Serving into a pdf so I can send it to my kindle.

You in school? Working? Got a girlfriend yet? ;)

Sounds like good stuff. (sorry for the late reply, btw. I forgot to check your profile. It's been a while since I've chatted with anyone steadily on here). Hope to see some of these ficlets soon!

Hopefully you'll have fun with those fics. I certainly did writing them! I'm thinking of putting my Resident Evil fic on ff.net. Despite the OC use out of necessity, I think it might be ff.net speed.

Going back to school come September (maybe; unsure as of now). I was working four jobs at one point. One position got downsized, One l left for health reasons (I was working security at a nursing home in the middle of construction, and I was sick as a dog every time I went there. Some kind of allergy or some such), one I left because there was no room for advancement and I got the managers in a few lies, and the other one I'm not sure if I'll go back to or not. I've got a job interview tomorrow, though, so hopefully that will work out. Work and school haven't been lucky lately, lol. As for the girlfriend thing, nah. Had my eye on three girls- two were engaged (seriously, how the hell did I manage that? One engaged I understand, but two?!), and the other has a boyfriend. So, no progress there. I'm going to shelve that particular desire until my luck takes an upturn, I think. One of the ones that is now married is going to be the 'one that got away', I think.

But it's not all bad. There's some other stuff going on that's plenty fun to make up for all the crap, so I really can't complain :)

Thanks for all the comments on 'Serving'!

Hi! Sorry I haven't been on in forever

i was wondering if you could put your serving fic into chunks of PDFs! I have a new kindle and want to read your fic :)

How goes it, my friend?

When you're on, if you could drop me a note on my profile, I need some advice regarding an odd, delicate situation.

Hi! I'm so sorry, my summer has been crazy as all get-out.

Also, feel free to email me or instant message me about this delicate situation. Sorry it's a week late.

I might have an interesting fic on that subject sometime soon. An interesting change for me. I've got some HolmesxKitty Pryde going on in it, since Scott's love life is pretty much non-existent in Wolverine and the X-Men, which was the basis for this. I should say, the short-lived (too short lived, really) cartoon was the basis.

I'll drop you an email. This is an interesting predicament for me.

And thanks for all the comments on 'Serving'! Okuden has been updated, too.

Can't remember- you an X-men fan?

Haha thanks! It has been a while, hmm?

Has indeed. How you been. i been bored as hell. I did start drawing again though.

That's good. I've been good too. About to start working at a club as a bartender.

Oh interesting. I'm working as a Security officer. I also got accepted to the police academy.

Lol. I've been waiting for my birthday sex for two weeks. :(

Sorry to hear that part :(

I'm on my second time through TNG, and Riker is less obnoxious this time for some reason. Wesley and Dr. Crusher, though...still wanna blast them out an airlock. Same with Troi seasons 1-3. I really wish they'd done more with Ensign Ro.

Sounds like a good idea for a fic. I'd certainly read it :)

Thanks for the comments, btw! Hopefully the big conclusion to 'Serving' didn't disappoint!

It didn't! I was really moved by it. I have two chapters left of the "after" arc, but my internet shut down. On the bright side I got a tablet for my birthday! I can now color my pictures beautifully. :3

Thank you ^^ I tried really hard to tie everything together at the end in an interesting way.

Awesome! I always come close to buying a tablet, but I don't think I'd give it enough good use to warrant it. Good luck with yours! What kind did you get, may I ask?

I got the Bamboo Tablet- I think "create." If you Google bamboo Tablet, it should list 3 and I got the green one. The cheapest one xD

That's the one I keep almost getting! I heard very good things about it from a friend on FAC. Midnight_Chaos I think it was.

I haven't had the chance to test it out yet but I'm gonna have so much fun.

Like I said, you're a good artist so you'll get good use out of it. It really does sharpen art imho.

Yeah. I can't wait. Some of my future drawings, like hisako transformed, need vibrant colors to do it justice.

Monday, remind me to work on your yuji/Sakura smut fic! I've got it halfway done, but keep forgetting about it.

Your work will definitely benefit from it ^^ Mind you, the quality is already there.