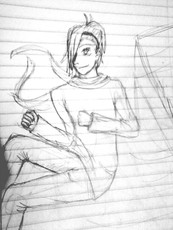 Nickname (I use): Cyphrus, Mikki, Myalie, Shiki, Miki (lol), Seisho, Sasori, Avel, Shawna...I use em all...dunno why tho. Lately I've been using ZJ and Misa tho... (ZJ stands for Zephro Jhonez, one of my charies for something...but I thought the initials were pretty kool... they could stand for Zayli Jayy... ^^; ...), Koharu (My Japanese name)

Activites: Oral Interp, Debate (was in for a month or so), Band, Choir (Hey, they kick butt. 'cause we went to Branson!!), Key Club, Art Club

Instruments played before: I'm a flutist but I'm going to play the tenor saxx for prep and marching band, and I've tried my older sister's claranet once. (I know I'm a geek~) I have self-taught piano, and my dad bought me an acoustic guitar for X-mas (Which I broke a month ago TT-TT)

Favorite Movies: Spirited Away, Princess Mononoke, The Cat Returns, Appleseed Ex Machina, Ponyo on the Cliffs by the Sea (it was interesting... XD), Howl's Moving Castle...


Aaaaaaaaaaaaaaaaaaaaaaanyway. I'll do drawing requests~ I'll try at least...I draw characters pretty good...people...Wolves...dragons...OC's...I've drawn a few of my OC's already. Most of em at least. I just need an excuse to do something. ... I CAN DO CHIBI'S ASWELL!~


Yeah, right now I'm working on a comic, and I'll upload it onto DrunkDuck as soon as I get far enough. I got the idea of the story down, and the title aswell; "Against the World"

Hopefully it'll help lots with my style of drawing and my anatomy. So it will be distorted and terrible at first, but that isn't really what most people who like manga pay attention to after a while... Well, at least me. Xd

Hopefully I can update this account further, so it kinda has just as much as my devart. ^^;; 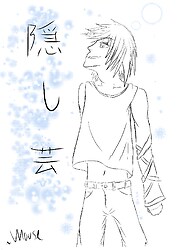