Yeah yeah I know I have the most square face imaginable.
Hey the name's Ben I live in a little country at the end of the world; New Zealand.

And who ever thinks that Keeley Hazell is hot , message me.

Favorite quotes.
" 'Why do you fight Leon?' it asked as it started to circle Ravedrus.
'Don't call me that!' shouted Ravedrus, his voice rough and hoarse, only just managing too get on his hands and knees.
The Daemon laughed again, it continued to circle 'or what Leon?' it asked 'or are you going to kill me?'
Ravedrus grinned 'I was going too do that anyway'" From Ravedrus

"A brother of luck, a dealer of death and a son a dog! " Major Elim Rawne of his commander, Gaunt's Ghosts

"were can i buy a phone?" Vincent Valentine, A/C

"I am a wood pecker!!!" smashes face into ground over and over; Ed from Ed, Edd 'n' Eddy

"There is no such thing as innocence, only degrees of guilt" Astartes Librarian off Dawn Of War

"A moment of laxity, spawns a lifetime of heresy" ancient Dark Angels' proverb.

"Daemons, mutants and heretics will fall before my blade!" Gray Knights off Dawn of War.

"He who sees his own doom can better avoid it's path.
He who sees the doom of others can deliver it."
Eldrad Ulthran, farseer of Ulthwe

IMMEDIATELY!!! prepare your brain for imminent explosion of this horror.

Three years ago, Nickelodeon cancelled the popular cult series, Invader ZIM, leaving fans angry and bitter towards the #1 kids network. But after the phenomenal sales of the first two ZIM DVDs, the upcoming action figures by Palisades toys, and the outcry of fans, Nick is bringing ZIM back from the dead. Production has already begun on season three of Invader ZIM. Jhonen Vasquez, the madman behind the series, will not be onboard this time around. Nick president Herb Scannell says that the series 'takes an all-new approach' next year, with all-new characters, such as Dib's baby brother, Gib, Zim's girlfriend Zee, and a mysterious group known as 'The Resisty' Everyone's favorite robot, GIR, will also have a new voice this season, by Spongebob himself, Tom Kenny. The animation style will take a dramatic change, animated by Klasky-Csupo, whose talents can be seen on other Nick shows, such as Rugrats and As Told by Ginger. Amanda Bynes makes a guest apperance as a new girl in Zim's class that Dib falls for. The new season, which begins next November, will debut with the episode 'friend or foe' in which Zim and Dib start to realize they have a lot more in common than once thought. Could they possibly become friends? Teen sensation Arron Carter will preform an all-new song for the intro, titled 'out of this world' which will also be available on Nick's new CD "Nickelpalooza."

How are ya doing? You need gmail or gtalk :P then maybe we will have a conversation again :) Might be fun XD

thanks for the fav again

didnt update latetly, since i didnt have anything good to show -- i have been doing nothing but practices

nice works on 40k stuff, i was trying too to get something related done.

No prob lol good to meet another fan

haha sorry I haven't kept in touch :( I be horrible internet friend. Glad things seem to be going well XD and hope that everything worked out with that contest! Yeah, I've been bar-tending a the restaurant I work at for a bit :) It's fun and I make good money but it's not like I'm at a club or anything ... hope you like it!

Talk to you later I hope :) Adios!

hey cool work :D and this is gonna be really random but i love your hair XD

Why thanks! your's is good to!

the sholder armor is faulty, and i dont want change it so that in the second pic i drew the shoulder pad is triangular shaped

saw your pic too and they are also good, especially those ones with hordes and crowds which i almost cant manage at all..

keep the stuff up!

oh nd i agree with u
transformers rules!
did ya no that they are making a second movie? apparently starscream has a bigger part to play in this one...i'd love to see how they bring back the decepticons nd also what other transformers are gonna be in it lolz

A sequel cool! do you have any idea when it's gonna come out?
Go to page: 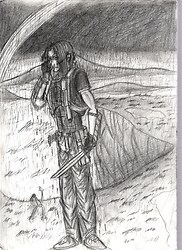