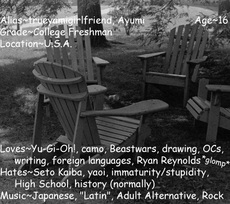 My CP's Bio:(aka the OC which I use most often to represent a character within all shows and situations)

Name: Ayumi Shinjite Tamahaki
Race: Half Egyptian, half Japanese, with a very small amount of Demon (out of the Japanese part).
Age: 16
Birthday: July 2nd
Height: 5' 5"
Grade: 11th (in America)
Hair: Long (about 5 in. down back), wavy, and blueish-black
Eyes: Navy
Skin: Slightly Tan
Main Outfit: Lose-fitting flair jeans, a dark blue tank top, and a golden locket with the Eye of Anubis on it.
Personality: Polite, slightly bossy, active.She's generally a happy person, butshe will not hesitate to defendher beliefs/friends/family if someone insults them.She's nice to peopleshe likes, and mean to peopleshe really hates (coughSetoKaibacough). Thus, forthright. She can be a little shy at times, like whenshe first meets someone, butshe's usually very open and friendly. In fact, if your familiar with psychological terms, think of Ayumi as having hypomania. (Either that or mania, but taking medication for it.)
Boyfriend: Pharaoh Yami (Yu-Gi-Oh!)
Ex-Boyfriend: Ken Ichijouji (Digimon)
Fav Colors: Coral, Navy, and Peach
Occupation: Singer, High School(er)
Location: Tokyo, Japan
Attack Tecniques: She can control water, and she has telekenesis. If she is required to,she can used a sword. (With the same sword techniques as Hajime Saitou from Rurouni Kenshin.) She can also do Karate.
Millennium Item: The Millennium Book, which does time travel, and doesn't have a evil spirit inside.
Sibling(s): Esanan Riyo Tamahaki, Ayumi's adopted sister. She's 13 years old, and known as Nanase in my fanfic Party Time.

Note: About the Mary-Sue-ness: Yeeeaaaah... Well, I'll admit it - she's a Sue. But I must say that what she can do depends on what anime I'm writing for. If it's for Yu-Gi-Oh, I exclude most of the magic/demon powers and sword abilities. If it's for another anime, if I ever right serious fanfiction for another anime, I'll probably exclude some other aspects. Or try, at least.
Maybe someday I'll change her in an attempt to rid her of the Sueness, but for now she shall stay this way.

~Facts~
-I hate Yaoi/Yuri, especially hikari/yami parings. And especially if it's just randomly stuck in the fic for the heck of it. That is poor writing. But I don't care if you like and/or draw it, just don't expect me to look at your fanart with it.
-I mostly center around Yu-Gi-Oh, but I do extend to other animes.
-I love many unorthodox parings. Although, I don't like incest, but I love crossover parings, as in taking one person from one show and paring him/her with a person from a different show.

Hey um... I wrote a comment 4 you in my pro. Like I said I was in a bad mood that day and I don't remember writing that comment. SORRY!

yayyy my favorite couple is Yami/Tea nice 2 see somone who likes thom. anyways i like your storys there cool. hope 2 seeya around. ^_^

well nothing gives me the right to order you around.
its just that if you would have read the rules it said not to post every little doodle that you make only submit pics that take time and allot of effort (hint your best work only) the person that made the site told me that they wanted people to show off there best work here and a get rep for bein able to draw well
when you post every little doodle you make then you just take that idea and smash it around stomp on it and burn it till its dead 3xs over
but hey thats just my opion(cept for the top part) you really should read the rules!!

Hey TrueYami! *waves*
Thanks for the comments and faving my Ryou pic!! Luv ya!

Hi, the pic of Ayumi and Yami no Yuugi is ready! Go check it out =D

Ps. thanks for the Marik pic, I died laughing ^^

Hey there :]
sure i'll do an art trade with you!
You still want me to draw that Yami no Yuugi pic with Ayumi, right? ok, i'm on it!
and for me, can you draw me with Yami no Marik? with lots and lots of girly girly hearts? heeheehee...
i'm such a girl...
nway, thanks for the faves!!
...and take your time, k? no rush!
Go to page: 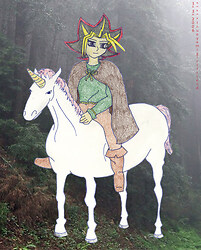