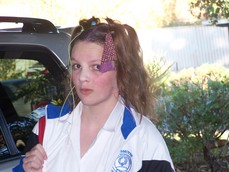 Hey hey hey! I'm in high school. Year eight. Yup. Full-on. Yes. So. Er... Check out my picz and comment. The volleyball will get you if you don't. Anywayz... *points to ceiling* OH LOOK, THERE'S MR. TUMNUS!! >:) mwehehehehe. Gotcha! MUAHAHAHAHAHAHA! WORLD DOMINATION IS MINE... unless the rubber ducky gets it first... Anywayz.... uh... I like stuff... I like writing more than drawing, cos I suck at drawing =P Being a cardboard box inspector is hard, I have to say. I got a degree in origami at Kingla Jing Jong University in Coogle Land, so I am considered a professional. Uhh... I have lots of friends (I know, hard to believe, aint it?) and they is all crazy. In fact, one of my friends, Ashleigh, well... you won't believe this but her locker IS IN NARNIA. It is true!!!!!!! I have seen Mr. Tumnus and everything. The dead pony who is know a ghost called Poooooooonay is my master, but I am only allowed to call him The Box. I am normal, don't doubt that. OMG! ASSAULT, ASSAULT!!!!!!! Never mind me, I just saw a toxic booger monster kick a wrestler on the ankle, and the poor wrestler started to cry. Poor wrestler... I really pity him. Yes... well....sorry about the typos. It's time for me to fulfil my duties to The Box and release the evil flying monkeys so they can go into outer space and do whatever evil flying monkeys do up tehre with their evil flying monkey friends. Yes. Well. I love Pooh Bear!! I also love Patrick Star xD. Brickwall waterfall SpongeBob thinks he got it allo but he don't, Patrick does, so boom with that attitude! peace punch caprain crunch i got something you can't touch bang bang choo choo train you wind me up I do my thang riecesd pieces seven up mess with me and i'll mess you up. Take that, Spongebob!! You don't have a tooth even NEARLY as sexy as Patrick!!

what it is homie g dawg? xP

Chelsmeister...?
*throws marshmallows at you*
YOU LEFT ME!!!!!! And without a lickel tooth TOO! TT~TT

NOOOOOOOOOO! NOT THE KRABBY PATTIES!!!!!

How can your computer be so CRUEL?! TT~TT

Yes, my computer tis an evil one. It eats krabby patties while spongebob is trying to make them...and then spongebob gets confused because he keeps wondering "where is my krabby patty stuff?"

They TRIED! But I had the salmon on my side. You DON'T cross the salmon Chelsmeister, you just DON'T.

You answered all of my comment thingies? And the computer wouldn't let it go through*
*glares at her computer*
Play nice! She's crazy- let's not upset her, shall we? =3

*slaps patrick on the backside and watches him waddle off*

*throws a purple snowball at you*

Got a computer! Miss you! Can't talk!

It also rhymes with NEBRASKA. =3

Patrick would be so proud of you, making friends with me via marshmallows. How I miss the old chap...

Maybe just you and me have some...

And yes, it is, indeed, young Stewart Griffin. What a splendid specimen he is.