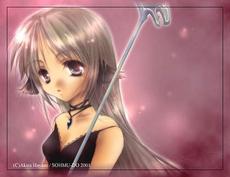 Hi, my name is Stephanie. I'll be 16 on the 25 of July 2006.
I'm a shy person. I not very popular, but I have my group of friends. I have brown hair and blue green eyes. I Hate Gym class! It's the worst thing. I'll be going into the 10th grade. I love comedy and horror movies. Nightmare on Elm Street is my fav horror. Freddy Kruger rocks! My favorite tv show is Buffy the Vampire Slayer, and Angel. Mostly because Spike is in it. James Marsters is awesome. CSI, Law and Order, Unsolved Mysteries, Foriensic Files, anything like that. Also I love House, Lost, Gene Simons Rock School, Tommy Lee goes to College. My fave anime shows are: Inuyasha, FLCL, Pokemon, Yugioh, Hellsing, and the Dragon Ball Z and Gt series. I love dragons, fairies, basically anything fantasy. I like. I have a small group of friends too. Fave Bands:Fall Out Boy,Green Day, Cheap Trick, Meat Loaf, Loreena Mckinnett, Bowling for soup, Sammy Haygar, Def Lepard, Skid Row,and My Chemical Romance! I love them. I like Mikey Way and Gerard Way most though. I have one brother, Logan,(LJH) and a step brother. Get this, his name is Logan too. Talk about confusing.
Fave books: Holes, The Edge Chronicals, A Child Called It, Ella Enchanted, Animal Ark Series, Songmaster, Diplomacy of Wolves, The Magic and the Healer,No One Noticed The Cat, and The River's Gift
Fave Season: Fall
Fave Drink: Pepsi and Moutain Dew
My friends on this site are:
theGhostofInuYasha: Know her for five years now. she's very (crusty)lol
LJH: My brother. Love him to death.
cyber cerberus337: Cool person, and Yahoo mess. buddy.
Lychee: Cool girl, we like a lot of the same stuff.
Alucards Bane: nice person. I like her a lot. She's got me interested in Hellsing!
seras familiar: she's very nice, and she's accepted my request! Weee!
SolitaryDreamer: She's cool. She draw amazingly too.
Allie: she's awesome!
krystalevenstar: she's awesome. She draw really good Inuyasha pics. too.
Pabbit_da_Rabbit: she shounds like a nice person. and she's drawing me a request. Yay! she's very very talented.
SiriusFan13: pretty cool. I like her.
The_creepy_guy_in_the_corner: really nice guy and he's a great friend. I'm in his comic. YAY!
Sugar n Spice: really nice person.
dream spark: Sounds like a good person
Sanctuary: Very cool person. They like Buffy and Angel too. YAY!
sueno-y-muere: She's cool, and she draws awesome.
Darkmooonangel: Very nice person. Glad to have her as a friend.
Sagered: YAY!
RanKo: WEEEEEEEE!
FreddyCKrueger: Freddy Fan. Wahoo!!
love_bunny: know her for a long time as well. Awesome person.

*~JamesMarsters~*
Also I do requests and art trades. ^-^. But only a certain amount at a time. I can't get piled up with them because of school.

Lilly
storm_pegasus
Where You Lay
Chii
Fiona for JamesMarsters, (Finally!)
SolitaryDreamer
The Queen of hearts
TheUnknownJournalist67
Death before dishonor
sloppey
458944332760387301353835352232

Yohoo~! Jamie James! Remember me? You asked me to draw a request on Lilly and Terin? Sorry it took so long coz I had a big project in university to finish and my group members weren't the most cooperative people in the world. Anywho, it's done now and I've posted it up. I hope you like it! ;)

pretty good, how about you?

We havent talked in a while, just
wanted to say hey.

Hey, uh, I have a question about your request... When you say you want the guy looking at the girl he likes, do you mean at like a distance or something? Or do you want him right in front of her and looking? I haven't quite started yours yet, so much homework and busy with volleyball. O_o Anywho, just leave me a comment on my profile.

hey! not much peopl on FAC!
i have the docter today i'm haveing a ashtma attack! *huh* can't breath *huh* to good! they *huh* might have to put me in the hospital! why anin't you in school today! *huh* tell me!
*huh*

hey steph! will you tell me the next time your scanning gracees pics please cause when she goes over your house i was wannting her to put some of my pics up i don't have any pics on my place its lonely....and i did a few requests and there wating to see them....if not soon there gonna hurt me!!!!!Lol anyway please tell me i want to know!

Hello.
Thank you for comment.
I am very glad you like my picture.
I'm not good at English, a reply becomes slow, and I'm sorry.
It may take time to draw a picture, but please request it anytime. 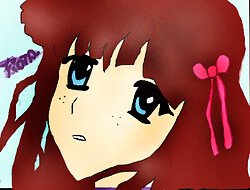