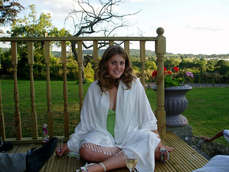 Heya, my name is Katie/Manning for any one who doesn't already know that. My profile picture is me at my Aunt's wedding.
Hokay, my real name is Katie but hardly anyone calls me that except my family, but they don't count. General informationwise: I am 16, my birthday is on the 21st March and I was born in 1990 Prince of Wales Hospital Sha Tin (sp?), Hong Kong. Lived there for almost 9 years and then moved to freezing cold England where my parents used to live. Yeah, as you can see I am not Chinese, neither are my parents, it is just Hong Kong is a cool place to live and no one actually believes it when you tell them that you lived there ^^

Okies, nicknames. Everyone asks for them in email quizzes, so now I will put them here for y'all, plan and simple, so I can just copy and paste them into emails. And they are: Katharine, Katie, Kate, Manning, Moo, Manny Moo, Moo-la-belle, Lou-la-belle, sl~aaaag (brother's)
and the names given to me by Nemya: Scummy, Crummy, Scumbag, Scum, Idiot, Toe, Toefest, Oy you, Mister and probably more but I'm too tired to think of any more.

I do have a few characters, and I will probably miss some of them out but thats because I am not perfect:
Gilthoniel- lotr
Feeder- Xmen
Cho- Fruits Basket
Kaede- Yugioh
Sephy (it might vary when I get around to writing it)- potc (hahaha Nemya is Elizabeth Swan not because I forced her to be but because she chose to be, thus proving her love for Orli Bloom)
Ebony-Harry Potter
Shiroi-OC
Um, and I think I might have some other random characters that don't really fit in with anything, most of them all have the same name because it is my favourite name at the moment......whatever.

Anyways, hmmm, what to say. Well, I like Fruits Basket, Yu-gi-oh, Inu-yasha, Chobits and a couple of other mangas. I love Lord of the Rings and Harry Potter as well.

Um, I like lots of random stuff, lots of animals, anything pink, shopping, going to kendo with my friends (4th Kyu!!!!), hanging around with my friends in general, email quizzes, quizzes about my characters in general (most of whom seem to have black hair, which I have only just realised o.O), mangas, animes, writing story, sometimes drawing, love reading in general, HAPPY TREE FRIENDS ^^, funny stuff on the internet, um, yeah, and other stuff.
Don't like really random stuff, like insects. Okay, I can deal with some insects like bees and butterflies (Cho means butterfly ^^), but I just cannot STAND craneflies or spiders (yes, spiders aren't insects, I do know this), OR COCKROACHES! They just make me feel physically sick ew ew ew! This is a very old dislike (when we lived in Hong Kong we had cockroaches inhabiting our bathroom cupboard *throws up at memory* and my brother picked up one of the cockroaches and put it into my room when I was sleeping and it flew onto my face *shudders*) I also really don't like being alone in the dark, probably because I watch so many horror films. But I am running out of pet hates, so will just continue with this, just to annoy anyone who is reading.

MUSIC! I love rocky music and anything with a guitar and drums. I love: Green Day, Less Than Jake, Freefaller, My Chemical Romance, Blink-182 (still can't believe they spilt up), Feeder, U2, Razorlight, The Killers, Bloc Party, Simple Plan, James Blunt, Athlete, REM, The Darkness, Rooster, Foo Fighters, Stereophonics, Placebo, Queen, Kaiser Chiefs, Coldplay, and many other people who I have forgotten and cannot remember but like anyway.

I have several mates on here, pink_lettuce_leaf, Nemya, Eoara, lanathae, Tillyenna and Nueme, all of whom are amazing at drawing and storywriting, yeah, and generally just better than me at everything! >__>

Um, I do draw (occasionally) but mostly I write fanfics. I may even do requests, not that anyone would WANT a request done by me. But yeah, if you ever seriously want a picture just ask, I will do my best to try and draw it. Or if you want a character in my story ask and email my details (physical, emotional, love realationships etc) and I will TRY to put them into my story, or I might forget, in which case I am a horrible failure and deserve to be flogged. I have forgotten to include one of my friends in my lotrs story and she got SOOOOOOOO mad, particularly as I was in her story and had like a whole chapter to myself *blushes*. Yes, but I do try, and she is in my other story so its all good ^^

Okay, well, I suppose you are bored now so I will give up this attempt to make a nice biography and go and do something useful, no idea what that might be though. Anyways, thanks for taking the time to read, however rubbish it is ^^

Hey hey, now have decided to make a sort of a journal thing. So here goes, it won't be updated every day, as I am so lazy. Well, yeah, it will just be extremely random:

March 24th:
I'M 16! HALLELUJAH! IT IS SO SCARY TO BE SO OLD, BUT SO COOL! I can now legally:
Smoke
Have sex
Buy a lottery ticket
Get married in Scotland or with my parent's consent
and probably a whole lot of other stuff. Who knows what other delights are in store for me now.
Okies, in 7 days and 2 hours I'll be leaving my school at 2 in the morning to go to Greece for 8 days! I can't wait! We're going to have so much fun, all those of you who go to my school! It'll be so awesome!
And in 18 days I'm gonna go see Less Than Jake live in Plymouth! How cool is that?! They are totally like the best band ever!
Oh, it's more like March 25th now. Oh well, I'm actually not tired at all. Hey, it's a Friday, who cares.
Well, I think that's a good journal entry. Bye dudes (or whoever is bored enough to actually read this >

Hola! This is Straw (setokaibaslittlesis)!
A few days ago, I was no longer allowed on my old account. Probably due to some stupidity on my part.
So this is my new one.
You are currently one of my fan's, and this is to let you know if you wish to continue looking at my stuff.
If you don't, then that is fine.

Hello how are you? your drawings are awesome i was wondering if you take request?

ooh, thank you very much! um, i don't draw much anymore, sorry. but check out some of my friends who are way better than me!! they're the really enthusiastic commenters hahaha

Hey There. Sorry about freaking out. Well, I got my Fruits Basket Next Gen story started, and Cho's in it. Here's the link! ^^
http://www.fanart-central.net/story-45812.html

^^' Erm...sorry about that. When people don't talk to me for awhile, I get really paranoid and decide I did something wrong. ^^; Sorry.

AHH! Did I make you mad? Because I am REAAAAAAAAAAALLLLLYYY sorry if I insulted you in anyway! And if you tell me what I did, I'll make sure to never to do it agaim.
I'm SOOO sorrY!

'Ello. Awhile back, you expressed interest in being the bull in my Fruits Basket story. I'm about to get started, so it would really helpful if you could come up with a breif, but somewhat detailed, history of her as soon as you can. No rush. Thanks!

Thanks! ^_^ It was incredibly nerve wracking.
Well,
He's R-E-A-L-L-Y tall, has short dark brown hair, and he plays the same intrument as me (the cello). He's actually first chair of my section.
I had something else to say but now I can't remember. Ah well. I best be going back to burning sermons on CD for my mom. -_-

Oh! Now I remember. How'd it go with Nemya and that guy around October last year? Did you get your wish that it wouldn't happen?

We don't understand this comment? What do you MEAN!

Wow, when was that? I can totally not remember that? Did I say what his name was? Whatever it was it didn't happen. Hmm, did I really wish that? Must check for more info.
Go to page: